So What Happens to an Abandoned Home? 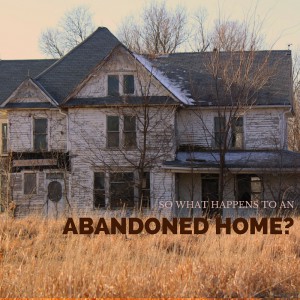 It's a sad fact that over 1,000,000 homes were foreclosed on by lenders in 2010, many of them still left vacant today. Abandoned homes have become so commonplace in some areas they're easy to ignore, but did you ever wonder what really happens to a house and its parts when left to its own devices? Eventually, nature takes back possession of a home and it spares nothing: roofs, doors, even concrete foundations are all susceptible to ruin when uncared for. Here's a fascinating look at what happens to an abandoned home.

Houses in the Southeast Fare the Worst -

Many people think "abandoned homes" and immediately conjure up images of Detroit or California but the truth is, Georgia and Florida are both Top Ten foreclosure states and the epidemic is only on the rise. Homes left to decay in the extremely humid Southeast take only about 3 years to become unrepairable whereas houses in, say, the arid Arizona climate can last up to 10 years without having to be torn down. Homes in cold, wintery climates like Chicago fall right in the middle, usually only surviving for about 5 winters before they're condemned due to ice and snow damage. As many Southerners know, an unmaintained house will quickly dilapidate, so it's crucial to stay up to date on home repairs and replacements.

Moisture is the Enemy -

If vandals and squatters don't get there first, moisture will eventually commandeer an abandoned home. Older roofs and improperly sealed windows usually begin to leak first, drawing moisture into the rest of the house. Once the floors and eventually the foundation are sufficiently soaked, structural issues will appear that likely make the home unsafe including cracked cement foundations, rotted framing and general mold. The only way to prevent this kind of damage is to seal and dry a home before the damage has gone too far so it's important to get several very thorough home inspections before you consider purchasing a vacant home, particularly in perpetually moist climates like Atlanta.

The surprising culprit that does most abandoned houses in isn't fire or even weather: it's plants. Once moisture sets in, vines like ivy and kudzu work their way through every crack and crevice they can find, usually starting with doors and windows. Eventually these plants will literally break open the foundation of the home and make things like staircases and decks dangerously unstable.Unfortunately, once plants reclaim a home there's little that can be done to fix the damage they cause. Animals are also a huge concern but surprisingly it's the smaller critters like termites and ants that do the most harm to a vacant home - larger creatures like deer or feral cats generally just investigate and seek shelter, doing nothing to further decay.

Fighting Weather is a Constant Battle -

As any homeowner knows, weather is one of the primary reasons to stay up-to-date on repairs for gutters, roofs, siding and even windows. Without regular maintenance, vacant homes are at the mercy of Mother Nature and it doesn't take long for things like snow, heat and even wind to take a toll. Particularly briny climates like Florida, for example, barrage homes with saltwater, ultimately eating away siding and rusting gutters if not cleaned regularly. Foreclosure hot-spots like Nevada face a different beast: heat, which can literally melt plastic fixtures and crack exposed roof tiles. No matter which part of the country you live in, rest assured there's some type of weather-related danger just waiting to break down your home.

So what can you do with an abandoned home? It's no secret that obviously vacant homes are terrible for property values neighborhood-wide, so if you've got the time and resources, do some minor repairs to the outside of a vacant home in your area like clearing the yard and patching any obvious holes. If you're considering purchasing a foreclosed home it's important to assess the damage nature has done before you buy to avoid a "money pit" later. If you're unable to visit the home before putting in an offer it's a good rule of thumb to steer clear of any property that's been vacant for over 2 years. If you find yourself in possession of a vacant home you'll need to do several things: call a contractor, hire an exterminator/gardener and invest quickly in a new exterior for the home. The first line of defense for a building is its shell so replace the roof, windows, doors and even siding as soon as possible to prevent further damage. Foreclosed homes can seem like a steal in such a buyer's market but be careful what you buy - sometimes a deal that seems too good to be true…actually is.

Heather Hendrick is a freelance writer.

How to Get Your Home Summer-Ready in Just Two Months